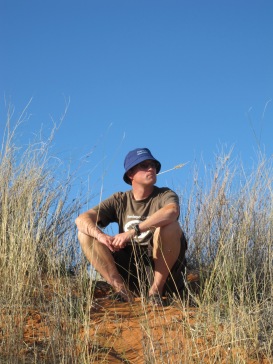 Assistant Professor at the Sociology of Development and Change group of the Wageningen University, the Netherlands, and Senior Research Fellow at the Department of Geography, Environmental Management & Energy Studies, University of Johannesburg, South Africa

After my MA degrees in Cultural Anthropology and Environmental Studies (both Utrecht University), I lived at the resettlement farm Tsintsabis, Namibia. From 2002 to 2007 I have supported the local community of Tsintsabis, which then still mostly consisted of former hunter-gatherers the Hai//om Bushmen (San), to build up Treesleeper Camp. Treesleeper is a community-based ecotourism camp, for which the idea had started during a 6-month fieldwork period for my MA research in anthropology in 1999.

When returning to the Netherlands in 2007, I started a job as a fundraiser for large grants at the Edukans Foundation, a great Dutch NGO specializing in educational development projects world-wide. In 2009, I complemented this job by starting a PhD as an external candidate at Tilburg University/African Studies Centre, University of Leiden. Working as a fundraiser was good, but I also felt as if I missed ‘the field’ and a critical and intellectual engagement with the work that I then did. Moreover, I had also gained doubts about the meaning of my earlier work as a development field worker in Tsintsabis, Namibia. Therefore, I decided to change my career path into academia and start the PhD. This resulted in the dissertation (a monograph) about Bushmen (San), tourism, nature conservation and power relations called Dwelling in tourism: Power and myth amongst Bushmen in southern Africa (2013).

InHolland University of Applied Sciences, Amsterdam, the Netherlands, I found a 2-year position (2013-2015) as a Postdoctoral researcher at the International Institute for Social Studies (ISS, The Hague, the Netherlands) of the Erasmus University (Rotterdam, the Netherlands). Almost finished with my PhD, the position at the ISS was the perfect move to develop myself further as an academic and it also gave me the chance to broaden my research interests to the field of ‘Nature 2.0’. In Nature 2.0, imaginations about nature (conservation) and the ways in which these are co-created through new and social media are the central dynamics.

In September 2015, I moved to the chair group Sociology of Development and Change (SDC), which makes up half of Sociology and Anthropology of Development (SADE), at Wageningen University, the Netherlands. Here I started as a hired Postdoctoral researcher for half of my time, in the NWO-sponsored research project Crisis Conservation, and as a lecturer for the other half, teaching 3 courses. On 1 January 2019 I became an Assistant Professor in tenure track. In Crisis Conservation, a project led by the chair of SDC Bram Büscher, we work in a team of 5 people to investigate wildlife crime and extraction in South Africa, Indonesia and Brazil. In addition to Bram and myself, three PhD candidates do long-term fieldwork: Lerato Takholi in South Africa, Nadya Karimasari in Indonesia and Thomas Kiggell in Brazil.

In addition to the teaching and research, I have organized the international conference Political Ecologies of Conflict, Capitalism and Contestation (PE-3C) in July 2016. PE-3C has been the first-ever bi-annual conference of the international Political Ecology Network POLLEN, of which Wageningen University has taken up the role to be its secretariat for the first two years. For POLLEN I carry out most of the secretarial activities. In addition, I play an active role in two groups of the Centre for Space, Place and Society (CSPS)—a collaboration between the three critical Wageningen chair groups Sociology of Development and Change (SDC), Rural Sociology (RSO) and Cultural Geography (GEO)—namely Tourism and Political Ecology.